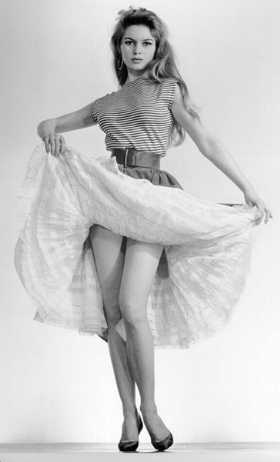 Bulletin Board for the Wayward

Unless other wise indicated, write us if you can help!

* Does anyone have any stills from the 1982 film The Best Little Whorehouse in Texas, starring Dolly Parton (with brief pettis swirling)?

* Dave Barber:  "I thought it would be a very nice idea, if any photos of the paper nylon  petticoats being made were available. [Tessy: Anyone out there have any?]  The paper nylon ones shown being made at one of the large lingerie factories during the 1950s, in the design stage, then the cutting room with many bolts of paper nylon about being handled and rustling, fabric being cut out, then at the sewing machine, inspection of completed garments, petticoats being modeled, then delivered to the stores, customers buying them.  I do know there are shopping ones, but the lingerie factory would be a novelty.  I am sure there MUST be a wonderful archive  wealth of photos showing the process somewhere.
Also, I would love to ask if there was ever a brilliant orange paper nylon petticoat produced?   And I would have loved to have felt and rustled the raspberry red and white candy stripe paper nylon and the bronze stripe paper nylon as featured in the Good Housekeeping magazine scans.  Does anyone own these exact same pettis?

* Andrew B. writes: "I have been trying for some time to acquire a copy of the movie Our Miss Fred, starring Danny la Rue. Can anyone direct me somewhere that might have a copy I can buy?  I have tried Amazon etc but it is not on general release.  Please respond to [email protected]

* This letter requires some insight, if anyone out there can provide it: "Tessy, I really love the picture sections you'(ve) add(ed) to Petticoat Pond, especially the April 12, 1954 LIFE magazine cover, 'Lively Fashions for Sub-teens' (although the models look a bit oldish for subteens), and the other catalog and old magazine covers. It was especially true in the 1950s and early 1960s that Hollywood and the Fashion Industry had older woman portraying teenagers. For example, in WEST SIDE STORY and BYE BYE BIRDIE, all of the leads playing teenagers were older. (For the fashion magazines and Wards and Sears catalogs, I often have wondered if they had to make especially-sized versions of the dresses and crinolines for the models to wear, or if they found petite models who could fit into teenager-sized fashions.)"

* We remember waiting every year for the New York Daily News to publish the pictures from the annual Harvest Moon Ball at Roseland, a ballroom dance competition they sponsored. The photographer had a great eye for catching a swirling skirt billowing way up. Does anyone know how to access those archives? They surely were rich in swirling petticoats billowing up to reveal the wonders underneath, ripe for exploration.

* We are wondering if anyone out there knows the exact month and year of the Look or Life magazine around the mid 1950's (?) that featured Ann Margaret in crinolines? Better yet, can anyone provide pictures?

* Has anyoneever noticed the drawings of undergarments used to decorate the walls of the office on the NBC television show "Veronica's Closet"? Can anyone direct us toward a place from which to purchase something similar?

* Do any of you know of a model named Ingrid Norsman? She appeared in various Toco Publications in the early 70's ("Spick and Span", "Beautiful Britons", etc.). If so, perhaps you can help in our search for any photographic evidence of her work.

* Dave Barber: Does anyonre know where Ian get some can can action pictures from the Looney Tunes Back in Action DVD?"

* A person is looking for a UK CD magazine entitled TURNABOUT, showing a son and dad dressed as daughter and mom on steps (He also believes the son is shown only in a petticoat)? Also, he needs information about a children's movie, made in 1948, entitled "Circus Boy." He believes a male performer got into a position where he had to fill in for a female horse rider, in femme costume. Was it pouf? The actors were James Kenney, George Stephenson and Florence Stephenson

* Diana (from Germany, Washington, L.A. and Alaska): We wrote a nice letter to you and it was returned. Hopefully, you will e-mail her directly and provide her with a way to contact you.

* If any of you there have a copy of the TV special entitled "The Scarlett O'Hara Wars," we would appreciate it very much if you would make yourself known to us.

* The "View" section (part 5) of the Los Angeles Times dated 8-27-82 has a 1951 picture of Marlene Dietrich au frou-frou. It would be a great addition to The Pond should anyone out there be able to provide it.

* Does anyone remember a photograph in the Dallas Morning News (and possibly others) showing Vera-Ellen at Love Field lifting her skirts for an emergency repair by an airline executive's wife, and showing her six petticoats? Would love to have a copy of THAT for our little place.

* One of The Pond's very supportive people (Janet) is looking for the correct e-mail address of "C.A.M." (from a close-by town in South Carolina) with whom she has been corresponding via e-mail.  Apparently, it is lost, and so is she!  PLEASE -- CONTACT US SHOULD YOU READ THIS!

* 'Satin Slip' writes: "(Recently) I saw a recent movie on HBO with Robert Duval and 2 young girls, (12 and 14?).  In one scene the younger girl was wearing a BEAUTIFUL petticoat slip while her sister was dressed in a pretty dress with a zillion petticoats . I ran to get the remote to start recording so I could send (Pettipond) some photos, but  no luck. I'm sorry. I hope our friends in lace will have better reflexes than I and I will soon see these lucky girls in your (ours) youth section."

* Eve writes: "I wonder if anyone in the UK  may be able to tell me where I can obtain patterns for  making  petticoats ? There  must be someone somewhere who supplies petti patterns."

A friend of The Pond writes: "I

'm looking for the cover of the  June, 1955 Seventeen Magazine.  Interested in either the original  magazine or an electronic version
that can be printed.  My mom's wedding dress was featured on it and she is trying to find a copy."  Please reply to The Pond

A visitor would like to know if anyone has the Madonna music video in which she is featured dressed up in an 18th century costume. It's pretty, because she spins around a few times and her pettis fly up.  If possible, could that person make it available to The Pond -- stills or vidclips?

'Ballroom' writes: Has anyone ever twirled in a massive, floor length gown, without any hoops confining it?  I sometimes fantasize a girl wearing massive ruffles underneath a stunning ballroom gown (probably several hundred yards), replacing hoops and flowing very beautifully when dancing, and looking even more stunning when she twirls.  If so please write me back!  If anyone wants to send me any scrumptious pictures or videos of themselves twirling around in their best dresses or gowns,
please do. The material must fall into these categories: - must have lots of frills -must be light enough to twirl above the waist - gowns should be floor length
and not be confined to hoops - must do your best practicing your twirls as much as possible!  What does it feels like to twirl a full skirt with a petticoat?  I know a lot of girls and Poufies like to twirl, but are there any here who can twirl 'professionally'?  I've seen it being done a few times: the girl just grabs the edge of her skirt, gets into sort of a cross-leg posture, and then spins it so much that it flies above her waist, and she spins about 3 or 4 times.  It's really pretty to watch (especially on that refrigerator dance sequence)."