The story of the eBay Petticoat, by Rosalyn!

(This series of events is directly linked to the crunchy, rustling crinoline which was recently listed on eBAY.....

Recently, I carted 25 boxes of miscellaneous antiques, collectibles, and vintage garments to a two day nostalgia show, held in another city in our area. I had accumulated much of it from yard and estate sales, and, although many of the vintage garments were quite nice, many could not be sold on the Internet; they would be a wonderful promotional tool for advertising to buy other items. In short, much attention was focused on my booth because I was the only vendor with vintage clothing. I sold several 30's sheer dresses to a lovely 19 year old who oohed and aahed over the vintage slips, shoes, and accessories; one of the dresses was destined for her May prom. I cleared out many, many items, but not before the moment when a middle-aged woman inquired if I would be interested in coming to her home after the show in order to purchase a large quantity of 50's and 60's items, left to her by a Great Aunt; I enthusiastically wrote down her address. That evening, in a room in the lady's basement, we sorted through garbage bags of little 50's sweaters, swing skirts, several elegant taffeta dresses, high heels, and assorted accessories. Much to her frustration, we could not seem to find a bag which contained, in her estimation, approximately 10 formal foundation garments, 1 full length crinoline, and about 15 slips, all from the same era. The lady queried her husband who explained that while she was attending the show, a neighbour lady had been given access to the room and had removed two garbage bags full of items unbeknownst to him, all for the sum of $15. The only reasonable assumption was that the neighbour had absconded with some of the very best prizes from this estate lot. However, and much to my delight, the lady removed from a closet in the room, two white crinolines, both equally spectacular, from the same estate lot; they had been hung up on a hanger beside the fur coat that I also purchased. The two crinolines were similar in their fullness as well as both being constructed of a variety of fabrics; one was several inches longer and a big SIZE MEDIUM, the other being a ladies SMALL. I purchased the crinolines, boxed stockings, 12 pairs of narrow-toed 50's pumps, several bouffant skirts and dresses, many 50's blouses, and some very demure sweaters, and carted them all home.

Now we draw closer to the point of my ramblings. I decided to contact a lady in our city who owns and operates a Victorian-themed tea room in her large and stately Queen Anne home; she adores all manner of vintage clothing. I did not want to be bothered to sort, scan, and sell the vast myriad of articles on the Net. My wife seized several garments, including the mink, and I thought it prudent to sell a large lot, for one price, to someone else. We arranged for her to come out to our large, cavernous farmhouse later in the week, during the middle of the afternoon. My wife was away for most of the day, and I found myself indulged in sorting and handling all of the vintage garments which I was destined to sell. I will admit at this point in time, that the two crunchy, rustling crinolines, especially the smaller one, absolutely fascinated and perplexed me. However, I was all too well aware of the damage that I could inflict on the smaller waist band of the smaller crinoline. I had recently bought a royal blue taffeta bridesmaid gown, in a tea length, basque-waist style, simply because it had been priced at $4, and because perhaps I thought that it might prove useful at some point in the future; it was a size 20 and I could almost secure the back zipper. I completely fell off the wagon (I'm happily married and do not DRESS on a regular basis) and became consumed with assembling a look from all of the garments that I was supposed to be selling. I still had a very imposing and heavily-boned Vanity Fair corselette, complete with hook & eye closures, spandex and lace panels, and garters, in a lovely formal black colour. Fine, I admit it; I stripped and forced myself into the corselette and fished through the bag of boxed stockings, finding a smoky gray colour that I thought would fit me. I wish now that I would have had the guts to shave my legs because I cannot describe how wonderful it felt to remove them from the tissue and slide them up my legs, attaching them to the garter tabs. I stuffed the cups of the foundation garment and donned one of my wife's blonde costume wigs, trying to at least protect the integrity of the illusion I was trying to create. In our clothing stash we have accumulated many pairs of vintage shoes and I found a pair of slingbacks that would reasonably accommodate my large feet; I forced them in and began to feel very tipsy and awkward. Without exaggeration. when I picked up the medium longer crinoline, the crunching noises that it made, almost caused my knees to buckle. I steadied myself on the bedpost and stepped into this crinoline, one foot at a time, feeling the paper-like acetate inner skirt slide over the nylon of the stockings. I flung the dress over my head and forced it down over my modified torso, watching the event in our full length mirror. The crinoline brought the dress to life, almost throwing the huge skirt into a poufy expanse of blue taffeta. I fought with the zipper and was deceived by the country quiet security which provided me this wonderful opportunity. Without the word of a lie, my wife and our prospective clothing collection buyer, stepped through our bedroom door, immediately coming to a grinding halt, both of their mouthes hitting the floor. Our second floor is entirely carpetted, providing a highly efficient sound barrier; I hadn't even heard them come in the front door. My wife very calmly stated that this was entirely in my hands and that she had some things to attend to, briskly turning about and exiting the room. Well, the inevitable had finally confronted me, much more awkwardly than I had imagined. The lady, whom I'll refer to as "PAT", seemed to have enjoyed my embarassing and uncomfortable situation because she didn't turn red and she had a Cheshire smile on her face. She said something glib like"I didn't expect you to model these things, but thanks anyways". She also offered to help me with fastening the zipper of the dress, if that's what I wanted her to do. I simply sat down on the bed and admitted that I had always been fascinated with 1950's fashion and perhaps had always harboured some jealousy for not being able to actively participate. We talked for an hour and a half and looked at many garment and accessories, I ended up changing, and I met someone who shared my enthusiasm for vintage fashion. Pat bought many items, including the medium crinoline which I had inadvertantly modelled for her. One of her closing thoughts on that afternoon, two weeks go, was that I was welcome to drop in for dessert and coffe on some weekend, with or without my wife, and if I was serious about my fashion fantasy, then she would entertain the notion of helping me dress, to the extent of actually looking real and interacting with some of her other friends. I don't know exactly what that meant but I know that I must see that crinoline again, whether or not I find myself corsetted, stepping into it, one stocking-covered leg at a time.

[Editor's Note (sorry to intrude) -- Gotta tell ya, Tessy fell in love with that petti (below) first time she laid eyes on it, even as only a picture!  It represented everything Tessy ever embodied as a 50s petti.  VERY sorry to have lost the bid. <sigh>.  However, the good news is that another seller was auctioning another, similarly styled petti, at about the same time.  So...Tessy overextended herself and GOT IT!  Wanna see it?   Wheee!] 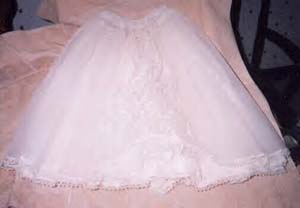