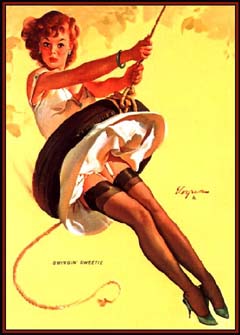 Submit your own or someone else's!

................About a month ago the other most embarrassing moment in my life occurred. Got off the bus, turned the corner and my (ahem) petticoat decided it didn't want to stay up so it starting inching itself ever so slowly down my body. Just try walking like a lady while holding your knees together to stop the slippage!! As it turned out, the petticoat won, it hit the ground just as I arrived at the building under construction. Yup, loads of construction workers saw me daintily stop, pick up my slip and they started to hoot/howl.:) I've been taking another street to work since then...........

[Ed: We all would like to have been there, Gaye!]

About two years ago we had a woman who visited my square dance club frequently and did not adhere to the dress code, which included a skirt and petticoat. After some admonition by the officers of the club, this dancer finally showed up one evening properly dressed, or so we thought. I was out on the floor dancing about two squares away when the caller called a "swing your partner." As I was swinging my own, I happened to see this other dancer two squares away when her skirt and petticoat went straight out horizontally from being twirled, to reveal nothing underneath except an tiny blue leotard. My jaw dropped. I had never seen a square dancer before who did not wear pettipants (or at least pantyhose) underneath, and haven't seen another since.

Click here to read about Yvette at the Amusement Park