How Petticoat Pond Got its Name

THE STORY BEHIND THE PICTURE IS BELOW 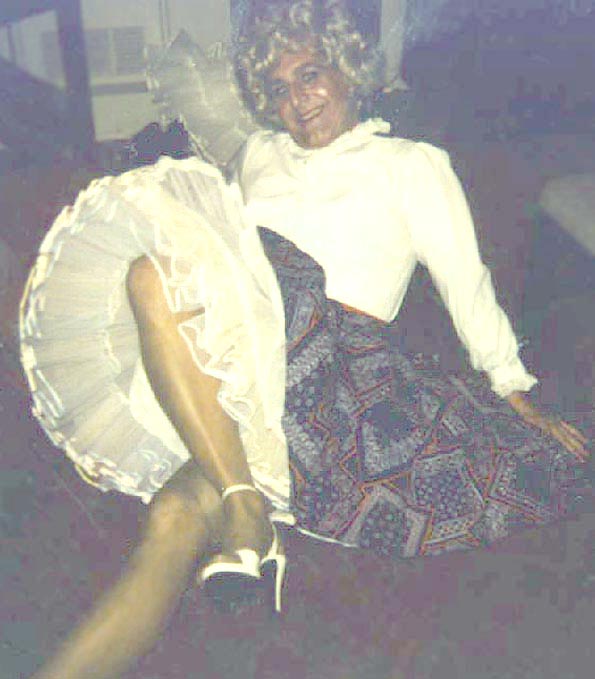 It was Halloween 1984 (I think) when all this started: a good time to go out "dressed" in public for the first time. A sympathetic female friend suggested that we go to a Manhattan club which catered to "alternative lifestyles" (I believe it was called "Le Scene."). Of course, being married, but estranged from my wife, I couldn't very dress at home, and my friend's place presented logistic problems. So, we decided to take a room at a modest-priced hotel in Midtown and cab it to 19th Street (as I remember) for the festivities.

It was a fantasy come true! I had never experienced the feeling of being dressed in public, never mind that I was dressed as a fifties gal, with tall heels and a bouffant skirt accented by a very wide stretch belt. Underneath, I had on two very favorite full crinolines and a straight slip as well to protect my modesty (Besides, I liked the way it tended to hobble my progress). I had lost a lot of weight at the time, but I wore an "all-on-one" anyway to punctuate my very desirable figure.

My friend (I'll call her Annie) helped me with the long fingernail extensions, as well as the nail and toe polish and makeup, and finalized everything by fluffing my blonde wig to perfection. A squirt of feminine fragrance--and we were off!

We walked out to the front of the hotel and Annie flagged down a taxi. New York cab- drivers generally are a very accepting lot, in that they have seen everything. However, when he heard my voice and realized I was a genetic male, well, his eyes popped out! Add to that the fact that I was having a modest amount of difficulty getting my crinolines arranged in the tight back seat (I'm sure he caught a glimpse of my garters!), you can understand that both of us had everything to do to keep from laughing! Annie is a BIG black woman, so we made quite a sight. Of course, we couldn't resist having fun with the driver, explaining that I had just had a sex-change operation and we had been married for fifteen years!

We finally arrived, and the night proceeded as envisioned, with me prancing about, acting the sweet high school girl and adjusting my pettis and hose at every opportunity. It was a lot of fun, and a long, heavenly night, as close as I'll ever come to BEING that girl. <sigh>

When we left, we had to find another cab, but, since the club was not on a main avenue, we had to walk about two blocks at 2am. Fate would have it that a group of rowdy teenaged boys was walking in the other direction on the other side of the street. Guess we made a good target (maybe because of Annie's size and my height), as they hurled epithets and curses in our direction, making fun of my pretty outfit, and, from the distance, thinking I was a female. Finally, I got fed up, raised my skirt and said (in my deepest voice), "Listen you hooligans, what's under these skirt isn't what you think, so, unless your want your genitalia handed to you on a platter, I suggest that you disappear!"It was with a sigh of relief that we watched them heed my orders. Guess they thought I was a cop! I DID have a Dunkin' Donuts bag in my arm! <g> Best bluff I ever attempted! Hate to think what would have happened otherwise! "You know what Indians do to white women!" [Gary Cooper in "Unconquered," 1947]

We finally captured a cab (with predictable looks from the driver) and walked into the hotel lobby. As we were waiting for the elevator, a security person approached Annie and explained that she would have to leave. It seems he assumed that she was a prostitute! What a night.

Rather than cause a scene, I went upstairs alone and peeled away the patina of womanhood. Such a memory. I do not have any other pictures of that delightful evening, but this is all I DO have to share with my cherished Poufbunny family. It is my sincere hope that you've all been there at least once in your life.

How PETTICOAT POND Got its Name

It was late summer, 1996 and Tessy was visiting a new friend (we’ll call him “Bill”) in Maryland.  The primary purpose of the visit was to attend the Maryland State fair  - Bill had told Tessy that a fine pastime was to watch the square dancers, mostly young, ride the Ferris wheel in their square dance dresses.  You can imagine the view, and you can imagine why Tessy was in a rush to get down there.

Well, THAT never happened – the girls must have decided not to ride that day.  But something else did, and that visit not only sowed the seeds of an idea, but named it as well!

The day before we went to the fair, Bill suggested we indulge in an activity that she enjoyed now and then, and would like to share with Tessy.  She packed several large canvas bags with petticoats and also took another large bag, the contents of which she did not disclose.  We then parked on the edge of a large semi-wooded area, and began a ½ mile trek, at the end of which was a small pond.  It was there that Bill, with a smile, produced from the mystery bag two deflated plastic rafts, which we blew up.  Changing into a few pettis, she advised me to do the same – we noticed someone on a rise a short distance away watching - he said nothing.  But that did not stop us from launching onto the pond, and spending the next two hours relaxing and talking, dressed only in our pettis!  The wet pettis were definitely and unique experience!

Bill and Tessy talked about a lot of things, and she persuaded Tessy to launch a new website, dealing with pettis.  It took a LITTLE convincing since Tessy was busy with her other new site, which deals with corsets, www.staylace.com.  The name that came out of that decision was  -- what else?  Petticoat Pond!

Three or so years later, Tessy received an email from an individual who alluded to seeing us and, only now, realized that there HAD to be a connection.  Small world!  (S)he was a Poufbunny! 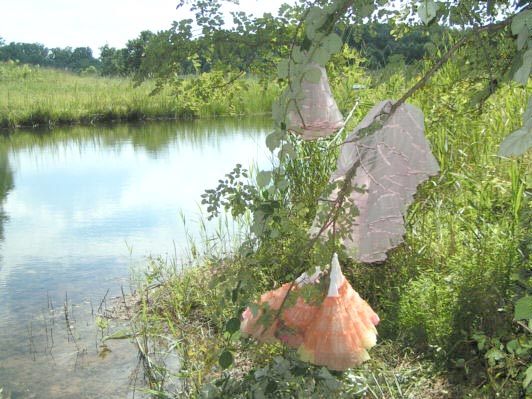