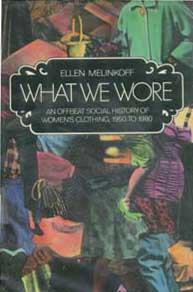 Printed here for review purposes only.

All copyrights honored and attributed to author and publisher (William Morrow & Co., NYC).

(pg 65) "In in junior high, 1955 - 1956, multiple petticoats were in full swing, so to speak. I remember trying to convince my mother that three or four of these were barely a decent minimum. It was critical that the skirt stand out like a longer version of the ballerina's tutu. As I recall, there were two kinds of petticoats: the net one which scratched your legs and the cotton lace, all seven or eight yards of which had to be ironed.

One day I lost my bottom petticoat. Of course, it was one that was really ratty and probably, knowing me at the time, not real clean. It had a button at the waist, which apparently came off. As I began walking out of class, there was this ratty petticoat draped about my feet. I was paralyzed with embarrassment, and around me boys were snickering. The homeroom teacher was male, of course. The boy walking behind me -- who undoubtedly had sisters -- calmly bent down, untangled my legs from the petticoat, handed it to me, and walked out. I spent the next two periods or so in the girl's room--dying."........." Gloria Casvin

Editor's note: To be that boy in back of her....(sigh)....the writer thinks he had sisters--I wonder!

(pg 65) "In the fifth grade (1957), full skirts hit. The fuller, the better. So we wore not one, not two, but three or more petticoats, starched stiff. When that wasn't enough, we learned to wear a hoopskirt. I say learned because it took practice to learn to seat yourself without the hoop flying up in front of you. I remember my mother suggesting that I could wear just one petticoat. Couldn't I see how much more graceful it looked, wearing just one? Of course not. What was the point of wearing just one? The fuller, the better........" Lyn Messner

(pg 69) "'Stand-out' petticoats are what I called them. Those horribly stiff, scratchy net things my mother thought were so necessary but were the epitome of discomfort. I had to wear them to church under my Sunday dresses. Before I would sit down in the pew, I would reach behind me and under the petticoats, to lift them up almost to the height of my head, and sit down--bare legs against the cold pew. I'm sure it looked pretty odd, but there was no way I was going to sit on three or more layers of scratchy netting for an hour." Pamela J. Baergen

(pg 69) "There was a girl in my school--a real sosh--who always wore her hoopskirt with such aplomb. She'd sashay down the aisles between the desks (to sit with a boy! in the eighth grade!) without it once ever flipping up. Not even the school bus was her undoing like it was for the rest of us "mere mortals." And the ridge of her hoop never showed through her skirt either. Not showing the hoop line was like not having VPL today. She must have topped her hoop with layers of crinolines. She wore this very long and with real Capezios."
Ellen Ekman